Retrospective: that cycle ride to Portugal

During the summer of 1990 I cycled from Sanremo (Italy) to Porto (Portugal) with my friend Antonio Galatà.

At 20 you don’t need much of a reason to do stuff.

I woke up one day and decided it would be a great way to spend the summer break from our student toils in Turin.

It took me about  five seconds to persuade my mate Antonio and off we went to buy the cheapest bike that was vaguely fit for purpose.

We departed having piled up at least ten hours’ training in the preceding weeks.

We figured it might take us up to a month, stopping here and there.

Worrying we might never actually get there, we cheated a bit: after a stop-over @ St Tropez – where our bike-trash style allowed us to blend with the locals like oil with vinegar – we took the train to Irùn nr St Sebastian (North-East border of Spain).

We then pedalled away from Bilbao to Burgos, Palencia, Valladolid, Zamora, crossing into Portugal at Miranda do Douro, then Vila Real and finally Porto.

Actually, once at Vila Real, tired of going up and down valleys with rivers at the bottom in 30-degree(C) heat… we took a local bus (this is the first time I publicly admit to what had so far been a well-guarded cheating secret).

Having ditched camping for hostels and restaurants half-way into the trip, at the end of the journey we were left with just enough money to buy a train ticket back to Italy.

– The Great Unknown: within a couple of miles after setting off, the sense of freedom and uncertainty as we were “heading for Porto” with only the vaguest of plans and close to zero training.

– Bikes-r-us: the smiling mustachioed guy in Zamora who repaired my bicycle’s wonky spokes at no charge.  By then we had reached official beggar status.

– The Angel: on the sweaty, uphill nightmare towards the Portuguese border… The hungry mirage of a rural restaurant.  Having piled up the few Spanish coins left in our pockets – amounting to a paltry £3 – we asked the portly ladychef for “whatever this buys”.  When served a goulash-style beef and potato  soup we silently moaned as the village banquet in the adjacent room was clearly and loudly in full swing.  But as we were about to up and go, the fat lady — no… The Angel — came out of the kitchen with two giant plates of steak and chips.

– Miracle puncture: the road to Miranda do Douro was one of the hardest climbs at the end of a long day of pedalling.  Pregnant with rain, the darkest grey clouds ominously hovered above us as we struggled toward the tiny hilltop town.  Our bikes were as exhausted as us: the exact second we got to the top, the skies opened and my back tyre suddenly went flat.  After finding shelter I could not stop thinking how lucky we’d been to get there with such perfect timing.  Surely down to the military-precision planning that characterised the whole trip.

– Heavenly bread: having emptied our pockets to buy the train tickets, we had to look forward to a 48-hr train journey with no food (a small detail that struck us a few hours into the journey).  Thank the Lord we were on a pilgrims’ train on the way to Lourdes! Out of either pity or fear or a combination of both, they piously offered us their surplus stock.  And we were sated.

– French thieves: as the overnight train from Toulon to Irùn stopped in Marseille and we were sleeping like babies, two wily thieves thought of nothing better than to steal a couple of our dirty clothes’ bags.  Awaken by a fellow passenger, I stealthily ran after them, barefoot, on the platform.  Having crept up from behind, I placed myself in front of them shouting “Au voleur!” at the top of my voice.  Who said that French 101 was not useful.

– Mephitic sunrise: morning farts in the tiny tent as the rising sun microwaved us.  A dangerous chemical environment.

– Cycling inferno:  our timetable of champions typically involved leaving the campsite around 11am – just as the saddle was starting to melt – mindlessly pedalling for 5 hours flat and finally – as the evening breeze finally put a stop to our slow-cooking process – find the next campsite.  Set up tent.  Buy a few gallons of beer and a tin of something for dinner.  Until we got bored of camping.

Stuff you do that is out of the ordinary: you remember it forever.

Friends: you love them forever.

A couple of weeks before the adventure.  More sunbathing than training. 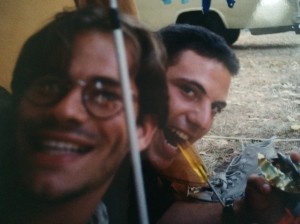 Opening tins of “food” with screw-drivers.  More drinking than eating. 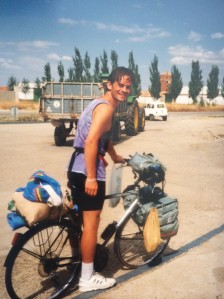 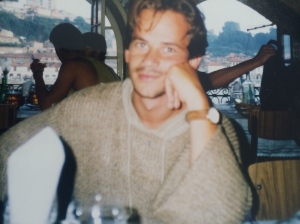 In Porto, sporting my “Jesus” look.  More posing than visiting.

Porto: by the river with no money.  More chilling than partying. 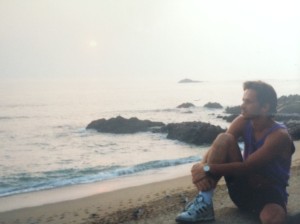 Porto: by the sea with no money.  More nostalgia than juice. 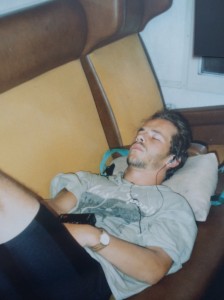 On the 48h train-ride to Livorno via Lourdes.  More sleep than food.